I had a big week in terms of training hours last week coming off my first weekend in a while without a race. According to Strava I exercised for 24 hours last week. The week was dominated by an 86 km bike ride on Wednesday, a 28k run on Thursday, a 37km run on Saturday and a 22km hill walk on Sunday. 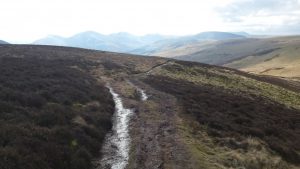 Looking back at the Kips on the 28k Pentlands Run

I’ll focus on the 2 runs as they defined the week. I’d done the same 28 km run route the previous week in 3 hours flat but this time managed to knock 16 minutes off that time. From the off the run felt good and I was ahead of the previous week’s schedule from early on. Remarkably I was still running with an 18/2 run walk strategy so this run included 14 minutes of walking which in turn included 14 photo stops. I covered over 600m of vertical ascent on this run which ended with an average pace of 5:53 min/km. This run was off the back of the 86k bike ride the previous day. The bike ride may have had a positive influence on this run just like the 2nd race in my double race weekends seemed to be the better race. 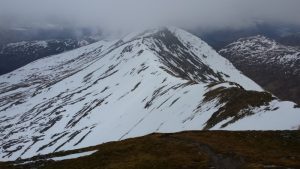 On Saturday I was on a mountaineering club meet at the Corran Ferry Bunkhouse for the weekend. Myself and one of the other club members – Walter – decided to go for a long run as the weather was not really for heading high up into the hills. We made a rough plan to head into Conan Glen for a few miles then make our way over a Bealach heading south to the next Glen before heading back out to Loch Linnhe. From the off we made good ground and covered the first 10k in just over 1 hour on a very good track. Our main concern was the rather swollen river we needed to cross to head up to the Bealach. We had to travel a good 2-3km further than planned before we could  safely cross. We did think about heading over a different Bealach at this point but with the cloud level lower and this crossing higher we headed back down the river to rejoin our original plan. Getting over the Bealach was fine and we had a lovely view down Hurich Glen. On the other side we started heading East, picked up a track soon enough which got better as we progressed but then me made a decision to leave that track as it would have had us gain height. The alternative wasn’t a great choice though and Walter was flagging as he had set himself up for a 25k run and we ended up doing 37km. He did very well in keeping things together as we ended up walking for a bit for him to regain some strength. After 6 hours we returned back to where we had parked the car.

Fiona and I had a nice walk up Gulvain the following day in better weather conditions. 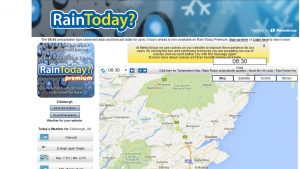 I mentioned this website on the DeZeiner Fitness Facebook page last week as it turned out to be a very useful tool.

As you know from above I went for an 80+ k bike ride last Wednesday. When I woke up the metoffice forecast suggested heavy rain all morning so I was about to move the ride to the afternoon although that suited me less. I checked rain today to see when the rain may abate and noticed that the rainfall radar would suggest no rain for the next few hours. The website basically runs through the rain movements of the previous 2-3 hours giving you an idea of the movement of rain. Having seen the radar images I got ready and went out on the bike. I got a brief 1 minute shower and some sun and was mostly overdressed.

During our skiing trip to Glenshee Carolyn mentioned that she had been banana & egg pancakes as post exercise recovery food and I liked the sound of those.

Last week I thought I would give them a try and with only 2 ingredients they are very simple to make. One banana and 2 eggs is all that is required. Banana gets mashed and the egg whipped. The 2 are then mixed together to a batter and then cooked like normal pancakes in small circular shapes. I served them up with maple syrup which they need as they are a bit dry otherwise (or I overcook them). The combination of banana and egg is definitely a perfect post exercise recovery food.

Lynn on her way to 3rd 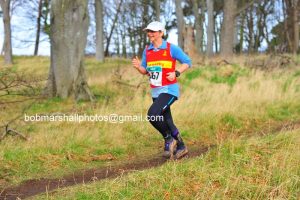 Carolyn on her way to first.

Carolyn and Lynn were in race action at the Foxtrail Winter Trail Series 13k race near Dunbar. Carolyn finished 1st in her category and Lynn finished 3rd in hers. Lynn was under instruction to take it easy as she was on her return from a hamstring injury and having stuck to this plan executed a good race and has come off the race feeling both good and back on form. Carolyn was slightly off last year’s pace and it can be assumed this is either due to a slightly altered HR target and in part the blisters that bothered her in the latter stages of the event. Nonetheless, 1st is 1st. Well done to both of them.

Unfortunately I will be losing one of my athletes at the end of the month as his personal circumstances won’t allow to fit in with the structured coaching approach. Gordon in my opinion had been coping really well recently but the work-life-training balance has to be right for an athlete to get the best out of themselves and not get stressed about fitting everything.

I do though believe with the right approach the training can be fitted in, in the right places. I ask my athletes weekly to provide me with their availability for following week before complete the following week’s training plan for them. I usually get this back in 2-3 different formats but the one that generally works best is if athletes provide me with as much detail of their upcoming week as possible only leaving those spaces free where they really have time to train.

Those spaces I will then fill with the training I see fit for them to do in that week. That said I will advise in advance where it would be good to keep a bit more time free if possible if bigger training weeks are required or longer sessions are required when building up to marathon or Ironman.

I mentioned on one of my previous posts about a possible photoshoot with Patricia Carvalho. This is yet to happen but I will decide on this once I have some team/coaching kit sourced.

Also last week I hinted at a possible international coaching opportunity. I was approached by Jamie of Jack and Jill Holidays who run a chalet in Morzine, France, and are organizing some triathlon training camps there. They were looking for a coach for 2 out of 3 of their camps. Unfortunately I could only cover one of the weekends as the other clashes with the Shropshire Triathlon which a couple of my athletes are competing in and I intend to be on site with them. 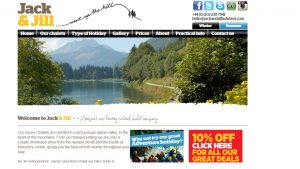 That all said I hope to work together with Jack and Jill Holidays in future and also use their facility for self organised triathlon or trail running camps, so watch this space as they already have the set up and this only requires me to put dates and programme together.

In the meantime if you are interest in a long weekend training camp in Morzine do give them a contact. The camps in May and July still have availability and the French Alps are a great location for a triathlon training camp.

That is this week’s update. Next week we’ll have an update on the first race in the Scottish Triathlon calendar at Tranent.