I recently somewhat by chance got hold of a pair of Brooks T7 Racer Running Shoes. In September 2011 I had to replace my Nike Marathoners and got a pair of Saucony Fastwitch. These sadly only lasted around two months and Saucony were kind enough to refund me the money for the shoe.

The reason for replacing the Sauconys was because they had broken on the inside wall of the shoe. But even before that had happened my experience with the Saucony Fastwitch wasn’t great. I didn’t have the same feel with them as I had had with the Nike Marathoners. I had lost touch with the ground I was running on, an important factor in running in my opinion.

So when I went to find a replacement for the Sauconys I was looking for something closer to the Nike Marathoners. I tried on a few different brands at my local running shop and then settled for the Brooks T7 Racers. My first impression was that they felt very light and moulded nicely round my foot. I also liked what Brooks had done with the laces. As you can see in the picture they don’t go straight down the front of your foot but drift off to the side. This stops the shoe causing pressure points on the front of the foot. Something I had noticed with the Mizuno Waveriders in particular. 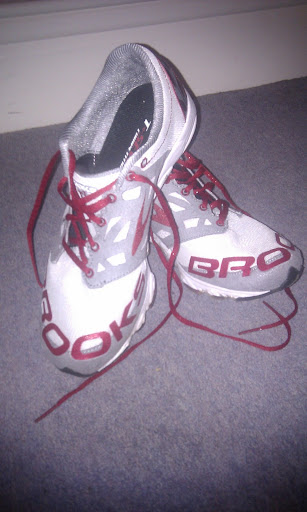 I have now run in the Brooks T7s a number of times and rate them very highly. For me they are a step up from the Nike Marathoners I had and they were a top shoe for me, not only because they lasted nearly 2000 miles causing me no injury but mostly because they were a good all round racer and provided my feet with a good running sensation. This sensation I was again getting with the Brooks T7s.

My impression of the Brooks T7s is that they take the runner another step closer to minimalist running. I get a very good feeling for how my foot strikes the ground with these and can gage much more how I am actually running. I have even been comparing one foot to the other.

I also have a pair of Vibram Fivefingers (VFFs) and the sensation I get with the Brooks T7s is similar to those I got when using the VFFs. I mostly stopped using the VFFs as they were a bit too unpleasant underfoot when going onto stony paths which I do a lot.

The Brooks T7s have little heel lift and very little cushioning which helps make the runner feel the ground. One way I often tend to do this – if the shoe allows – is by grabbing the ground with my toes, i.e. curling the toes under. The Brooks allow me to do this, the Nike Marathoners and the Saucony Fastwitch did too. My better cushioned Mizuno Waveriders were too restrictive for this though.

The lightness of the Brooks together with the way it moulds round the foot really provide a very good natural running experience for a normal racer. I feel with this shoe I found the replacement for the Nike Marathoners I was looking for.

The one bit of criticism I would give is that the sole of the shoe provides less grip than any of my previous trainers did and I can’t really see myself using them on light trails. This just means that my trail shoes will get more use.

I was also impressed with the prize of the shoe, Only £56 compared to £75 for the Saucony.

I would like to add that this review is purely based on my experiences with the shoe. Everyone’s running is different as are our feet and therefore different shoes suit different people.

The Sauconys didn’t suit me but this doesn’t mean that they are a bad shoe. They will be great for someone else no doubt. I don’t believe there is a best shoe out there, every runner has their best shoe!