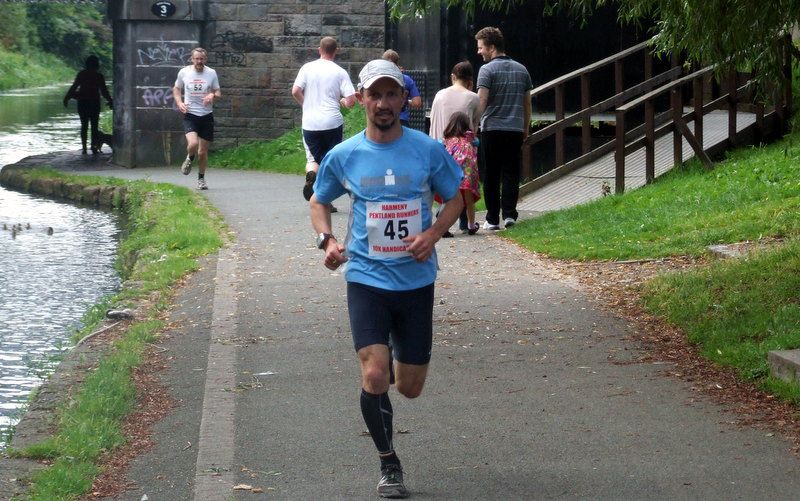 On Saturday Harmeny Athletic Club (HAC) organised their 10k handicap race down the Water of Leith path and along the canal to finish at Harrison Park in Edinburgh. I coach Pentland Triathletes who are affiliated with HAC and was therefore given the honour in joining the race.

As a handicapped race the slower runners go off first with the faster ones set off later to take up the chase. The ideal aim is for all runners to finish roughly at the same time. Handicaps were either based on the time posted in this event previously or your PB over 10k. My handicap was therefore based on the Dunbar 10k I had done in April 2011 where I finished in just under 39 minutes. I would therefore start just under 32 minutes after the first runner started.

This was not only going to be my first race since my attempt at the West Highland Way Race but my first attempt at anything short and fast since I’d run the Lasswade 10 mile race in March 2012 so it felt a bit like a step into the unknown not least because I had recently been ramping up the mileage with the next ultra marathon only 3 weeks away. For the first time in a long time I was wearing calf guards again.

The runner that had started immediately in front of me had a 2 minute headstart so for the first 3km of the run I didn’t see another runner as I (luckily) wasn’t being caught either. Compared to a normal 10k race it felt a bit strange as you didn’t seem to be competing against anyone bar yourself really. Felt more like time trialling or a high speed ultra marathon where you wouldn’t see anyone either. So you really just constantly had to keep your foot down hoping that every time you came round a corner you would finally see someone who had started ahead of you and you could pass them. Between 4 and 5k I was able to catch a couple of others but was also passed for the first time by Darren. I tried to keep up with him but that didn’t last. Keeping him in my sights helped though. The gap gradually grew – 5 seconds, 10, 15, 20, 30 and so on. Once I did lose sight of him it was just me and the Garmin to keep me company until I hit the canal with 3k to go.

Ross who before we started was dismayed that I would have 3 min headstart, caught me just before we reached the 2k to go mark. As with Darren I tried to stay with Ross and thanks to more runners being on the canal as we were overtaking some of the earlier starters, I had some success in this. I finished the run in just under 41 minutes for what my Garmin claimed to be 10.5km. Considering the lack of speedwork on my behalf that is a fairly decent result in a race with a difference.

Thank you to the HAC and Pentland Triathletes guys for letting me join in.