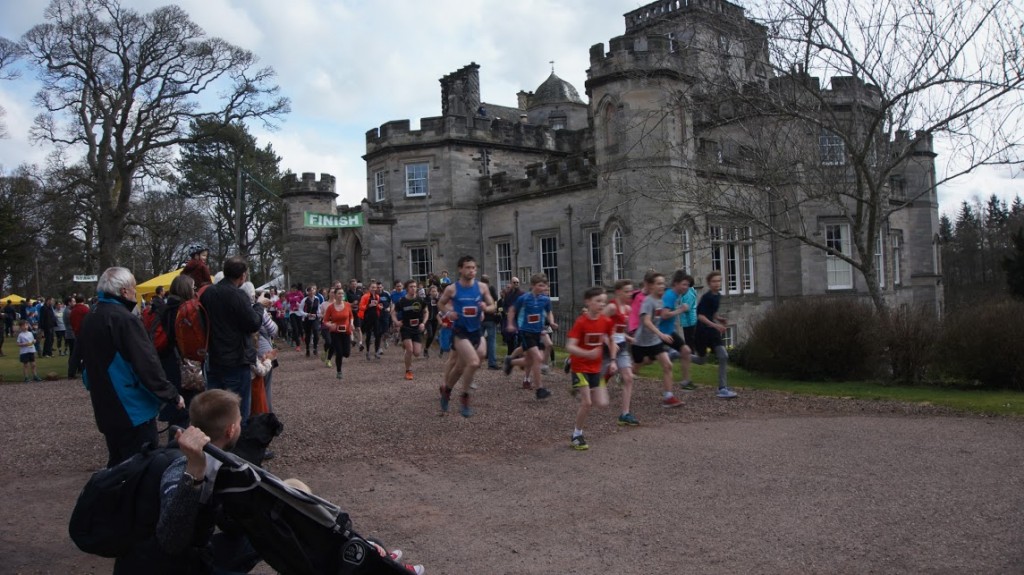 The key event for the week was going to be the Grangemouth 10k with Fiona’s aim to go under 40 minutes for the distance. In 2015 she had finished just outside 41 minutes having targeted something slower than that. This time gave her the belief that she could go under 40 min.

The Harmeny Trio at Grangemouth 10k

Training had been going fairly well but with triathlon and duathlon events happening the focus had shifted away from run speed only. The week leading up to the race was also interrupted by the trip to Oxford and a short bout of a cold which luckily subsided by race day although the pre race loosener felt very poor with Fiona commenting that she be surprised if she could even beat her 2015 time never mind go sub 40.

Race day came with pretty good conditions and Fiona got a lift to Grangemouth with a couple of speed merchants from Harmeny Running club – Phil and Damian – who would both finish in the 35-40 min bracket.

I wasn’t in the country so couldn’t be there to support.

The aim I set out in my brief was to get a time advantage over the first few kms and then see how things feel and either hold onto that pace or back off a bit making use the advantage gained. It was also important to start close enough to the front, so in front to the 40 min marker to not get boxed in or spending too much time weaving in and out of other runners.

Grangemouth is a virtually flat course bar a couple of bridges and the only thing that will really affect speed is wind so ideal for a PB. Fiona effectively executed to plan backing off a bit around half way when the pace felt too high but having something left for a push over the last km. Interestingly, she didn’t have an idea of the overall picture during the race as she only had distance, lap pace and another setting on her watch but no overall average pace or overall race time. In her words this was preferred as the other settings would have put more pressure on her. I would prefer to know if I am on target or not but these things worked differently for different athletes.

Fiona eventually crossed the line in 39:43 minutes stating initially that it was hard and she prefer not to have to repeat that before wondering if she could go faster which she obviously can.

Also racing at Grangemouth was Tracey Cameron whom I have been coaching for her swimming of the past few months. We have to date not done any coaching plans or run coaching (coming soon though) but Tracey has nonetheless run a PB in the 10k.

The day before Lynn ran the Winton 10k which is a trail race in the grounds of Winton house. After some ups and downs with the run legs it was good to have Lynn do a race again and enjoy herself. The time was nothing special but being able to get out there on a lovely day was important and a good day she had indeed including cycling to the start as a warm up and cycling back as a warm down. The one thing Lynn didn’t approve of though was the 2pm start time. That kind of start time does mess with the race day planning.

Earlier that day Mo did Cramond Parkrun. My athletes usually do these when they fit in as they are a great way to see where they are in terms of performance and a good 5k speed session. Mo is in the 65-69 age group and finished in 23:52 which is 19 seconds off her PB which was set 5 years ago. Parkrun have an age grading system which levels the playing field. In 2012 Mo’s age grading was 78.71 %. On Saturday it had improved to 90.29 % which places her 7th in the age graded league.

In Mo’s own words: Thank you Karl, your training plan has worked yet again.
I achieved my running goal in the parkrun, 90 percent in my age grade and I feel very happy with that result.

While all the above was going on I was in Austria for a short surprise visit to my dad’s 75th and my godmother’s 70th birthdays. I was hoping to get some hill/mountain runs in but the birthdays took precedence. They weather was also against me on the getting up high front as the day after my arrival it snowed down to 1000m with temperatures dropping to 5 degrees. 2 days later it was 5 degrees and the snow had buggered off again. I did get a total of 25k of running in nonetheless.

I should also add for completeness that Fiona and I got another 50km cycle in on our way North from Oxford on the Monday which even though the weather was threatening to soak us turnout to be good fun as we pulled off the M6 just south of Tebay services and managed to put together a great backcountry route coming through a couple of beautiful small villages such as Great Asby.

Something I started noticing while coaching swimming that swimmers if not told to only swim a certain distance at a time will just continue to swim until too exhausted to go on. This appears to especially apply to those newer to swimming. The same I guess actually applies to running, cycling and other endurance sports too.

If you are used to track running then it is common to be running repeats and take some rest in between. The session may add up to 5 km but broken down to 10×500. Now you could say that you can’t run 5000m in one piece but only run 10×500 with pauses. You do though do these usually at a higher effort than a longer run. As you training progresses the time of you rest intervals shortens moving you closer and closer to a full 5000m.

This same principle can be applied to swimming especially when new to it and trying to improve your technique. If you can only sustain 50m in good form then start with that and repeat with rest intervals. Then add another 25 when ready, followed by another 25 when ready. This will allow you to build your covered distance while maintaining your technique. You can also play around with the rest intervals you put in. You may have started with 20 seconds, then drop it to 15, then 10, then 5 and suddenly there is none.

Thanks for reading, next week we’ll have a lot of reporting on the Gala Sprint Triathlon.